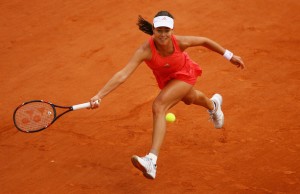 Ana Ivanovic (November 6, 1987) is an offensive baseliner (plays from the back of the tennis court, around the baseline, preferring to trade groundstrokes rather than to come up to the net). Her game relies heavily on the power, depth and placement of her forehand strokes, producing lots of winners through penetrating, flat shots, with the occasional spice of topspin.

Her net play is not used as often, but her volleys are generally well executed, as are her drop shots. Her two-handed backhand is solid, but given sufficient time, she usually reverts to an inside-out forehand or a one-handed slice backhand instead. She has a huge but inconsistent serve, although she has been known for hitting aces on her second serve; she has won one-sided matches with a first serve percentage of below 40% but makes it up through her well-timed aces. (Source: Ana Ivanovic on Blogger)

Known for his athleticism and speed around the court, Nadal is an excellent defender who hits well on the run, constructing winning plays from seemingly defensive positions. He also plays very fine dropshots, which work especially well because his heavy topspin often forces opponents to the back of the court.

Nadal employs a semi-western grip forehand, often with a “lasso-whip” follow through, where his left arm hits through the ball and finishes above his left shoulder – as opposed to a more traditional finish across the body or around his opposite shoulder. Nadal’s forehand groundstroke form allows him to hit shots with heavy topspin – more so than many of his contemporaries.

Nadal’s serve was initially considered a weak point in his game, although his improvements in both first-serve points won and break points saved since 2005 have allowed him to consistently compete for and win major titles on faster surfaces. Nadal relies on the consistency of his serve to gain a strategic advantage in points, rather than going for service winners (Source: Wikipedia). 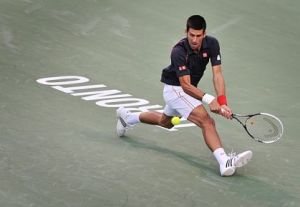 (May 22, 1987) is an all-court player (use the best bits from each style and mix it together to create a truly formidable tennis style to play against). His greatest strengths are his groundstrokes, serve, speed, and confidence. His forehand is powerful, deep, well angled, and hit with strong topspin. Djokovic is known for the ability to outhit his opponents from the baseline.

When most effective, Djokovic rallies from the baseline just long enough to construct the point and enable himself to hit a winner from an advantageous position. With considerable speed, his serve is one of his major weapons winning many free points from his flatter first serve and employing as his second serve a strong slice served out wide.

While very sound and powerful from the baseline, he would often finish his points by coming to the net similar to Roger Federer. He also utilizes a well-disguised backhand underspin dropshot and sliced backhand (groundstroke) in his repertoire. His use of the one-handed backhand drop shot is unusual for players who usually use a two-handed backhand to rally from the baseline. (Source: Wikipedia, TennisNow)

Rackets of the Pros