During the earlier rounds in the singles, two American names were a stand-out at the Flushing Meadows. First on the mat is John Isner. Coming to US Open as 55 in the world, the 6’9″ American needed to survive a first-round-scare against 29th seed Victor Hanescu, 6-1, 7-6, 7-6. Yet, Isner continued his fantastic run at the slam with a straight sets second round win over Marsel Ilhan.

Not yet contented, Isner put Andy Roddick in a rough position and knocked the Wimbledon 2009 finalist out in five sets with ninety winners and and show the world he’s the next Serve-and-Volleyer superstar. That match alone, he produced thirty-eight aces under his watch. That’s the bomb and all I can say, Roddick-Isner Match? One of those blockbusters to watch in its entirety.

John Isner was the last American standing in the draw and stood at 52% in his net approaches during his fourth round clash with Fernando Verdasco. However, Isner was not winning most of his baseline points and allowed the Pilot Pen 2009 Champion to dictate. Verdasco ousted Isner in four (4-6, 6-4, 6-4, 6-4). For Oudin, she was overpowered by Caroline Wozniacki in the quarterfinals. Oudin produced eleven winners to Wozniacki’s five but that record was not enough to win a 2-6, 2-6 loss.

Second-round exit last year and now, Ana Ivanovic made another record by making her first-round-exit in a Slam. Having won the first set against Kataryna Bondarenko, Ivanovic’s emotions were all over the place and couldn’t survive the third set scare. Bondarenko survived at 7-6 despite of Ivanovic’s 34 winners, 3 aces and 108 total points won. Yet, all smiles for Kataryna, she made it through the last eight before falling to Yanina Wickmayer. I was just wondering and it’s also quite odd to believe it. Ana Ivanovic’s very first opponent in 2009 Brisbane International, Petra Kvitova, powered through and win a match over Ana’s 2008 Roland Garros finalist, Dinara Safina. UNEXPECTED.

If there’s anyone in the slam that deserves a praise despite his semifinal upset to Juan Martin Del Potro, that must be Rafael Nadal. This King of Clay was undeniably a tough competitior. Nadal was in a difficult position this 2009. He was forced to withdraw in Wimbledon due to knee injury, he step down to number three in the world and he was opening his USTA Tennis Campaign by facing a hard-hitting one-backhand pro and former number 7 in the world, Richard Gasquet.

However, Nadal was not overwhelmed by names and aces, he continued to be mentally-tough and outrun Gasquet, Kiefer, Almagro and Monfils. A crazy-big-supporter even attacked this 2008 Wimbledon Champion after his fourth round triumph. Still, he stayed positive and just give the reporters a laugh.

Positive, Insightful and Confident– That’s the King of Clay but he couldn’t find his rhythm during the semis and fell to Juan Martin Del Potro (2-6, 2-6, 2-6).

Venus Williams almost loss her first round against Vera Dushevina but escape a 4-5 deficit in the second set and came victorious till the fourth round. But that’s fine, Venus and Serena won the womens doubles and downs Cara Black and Liezel Huber in straights. Hooray for Venus but trouble for Serena.

During the semi with Kim Clijsters, Serena lost her control and losses a point (15-40: 5-6) due to conduct violation. I visited the USTA site this morning and found Serena’s statement. The “I-will-shove-this-ball-down-your-fucking-throat” was left in the books and replaced by,

“I’m a woman of great pride, faith and integrity, and I admit when I’m wrong.”

With that said, Serena Williams has proven that she’s not only an athlete who can hit balls with great precision and power but she’s also a courageous person who has the ability to admit her mistakes.

Not to be forgotten, Novak Djokovic was once again upset by Roger Federer (6-7, 5-7, 5-7) in the semis. Nole’s playing style and 31 winners might not be enough to defeat Federer but he had wins over Ivan Ljubicic, Carsten Ball, Jesse Witten, Radek Stepanek and Fernando Verdasco. Nole was also having a great time in Flushing Meadows by making the whole stadium laugh as he impersonated 1984 US OPEN Champion, John McEnroe. 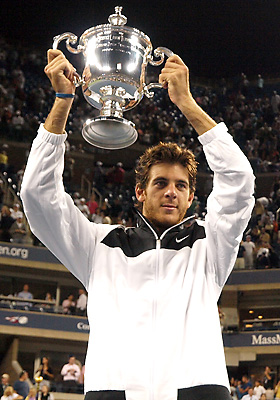 Who are the Big Winners?

Of course, everyone went for Roger Federer. It’s a giveaway situation if FedEx wins sixth time in a row. I have much respect in him but thanks to Juan Martin Del Potro who turned the world upside-down. Stunned Federer in five sets (3-6, 7-6, 4-6, 7-6, 6-2), this sixth seed in the world became the fifth-youngest US Open Champion at 21.

If you are going to scan Del Potro’s Slam Record, you would be amazed. This 2009 Legg Mason Tennis Champion only had two tiebreaks before reaching the finals. It was really not an easy test and passed Marin Clic, Rafael Nadal and Roger Federer back-to-back-to-back Slam.

Returning mom Kim Clijsters, sealed her second grand slam victory over the ninth seed Caroline Wozniacki. For this, the former world number one ensured a TOP 20 spot in the rankings once it came out. I didn’t know with Caro. She couldn’t produce a lot of winners during her finals. Kim fired three aces and 36 winners compared to Caro’s 0 and 10, respectively.

I personally want Caro to win. This 2009 AEGON International Champion got lucky in most of her matches even she’s too defensive in her play. Kim was clearly the better player and be in a great form, she will reach the WTA Seed 1 next year.

2009 Grand Slams passed and yes, US OPEN 2009 ended with lots of unpredictable twists till the finish line. All great, I enjoyed it. Now if I am evaluating the series of events in these Slams, the order is:

US OPEN 2009: The ending is unpredictable, NICE!

ROLAND GARROS 2009: High five for Svetlana Kuznetsova. Everyone rooted for Dinara Safina that time and I salute Kuznetsova for putting a stop in the predictable plot. First time in red-clay history, Rafa Nadal was out before the last eight.

AUSTRALIAN OPEN 2009: Verdasco-Nadal semi was an epic and Nadal won it all against Federer.

WIMBLEDON 2009: Predictable wins for Roger Federer and Serena Williams but two-thumbs up to Ana Ivanovic, Fernando Verdasco, and Novak Djokovic. Only Nole made it in the last eight but Ivanovic and Verdasco made the fourth round here before giving in to Venus and Igor. STILL AMAZING!

Next stop is ATP World Tour Finals at London. I have no bets yet and it’s too early if I’ll say Federer, Murray or Roddick will win it all. They deserve it but it’s still early. Anything can happen in tennis, right?

5 thoughts on “US Open 2009: Memorable Wins for Clijsters and Del Potro”