THE STANDOUT: Whoa, Matt was eliminated. Was this unexpected? Yes. Was I surprised? A bit no and yes. This elimination was totally not 99% surprise but it’s a good blindside, right? The other truth is, strategy-wise, Matt did nothing wrong. He decided to play a social “As long as it ain’t me” game, which was similar to Sandra in HvV and in Pearl Islands. The strategy could have worked. He’s in the right situation in which he simply have to convince and make Phillip believe he’s one of his Stealth R Us.

Matt allowed himself to dive into a complicated situation in which he remains uncertain – that’s the biggest problem. Considering the edit was 100% true, Matt appeared confident with his position. Somehow, he failed to remember he’s playing a game with Cochran – who’s a true blue student of the game.

Cochran was responsible for Matt’s elimination. His strategy was to give himself enough time to analyze the situation with logic – before convincing the other three favorites to vote against Matt before he and Michael go against them.

THE UNLUCKIEST: When Cochran turned himself into a smart beast, there’s no way out. He turned opportunities into gold. Try to remember what type a player Cochran and you realize he was a fan too, like Matt, before becoming a favorite. But given the situation in which he has the freedom to choose between two strong alliances, it appeared Cochran wanted to prove something better for himself – that if he remains loyal, he showed Matt he’s a better fan. That’s why, he gave Matt his moment to say his last farewell.

THE GOOD: It’s a given fact after a switch, one tribe went south while the other became Greek gods. The New GOTA (Eddie, Reynold, Malcolm, Erik, Sherri, Andrea and Brenda) got all the love, luck and respect. This tribe got the looks, the muscles, the brains, the charms and the game. Three of my six pre-show bets were in there too – so what more can you and I ask for?

In food, the New GOTA was the appetizer, the main course and the dessert. In basketball, it’s the dream team for Olympics. In tennis, each was an all-court aggressive player who could upset the World Seed #1 at any surface.

The Immunity Challenge was the proof. The New GOTA moved fast. Each pair rolled six crates like it just weighed 10 lbs. Most importantly, they think like straight A+ students when it comes to puzzles.

Just one complain and it has nothing to do with the New Gota or Bikal. It’s just that the act of smashing eggs becomes lame for a tribal switch. Time for a change, perhaps. 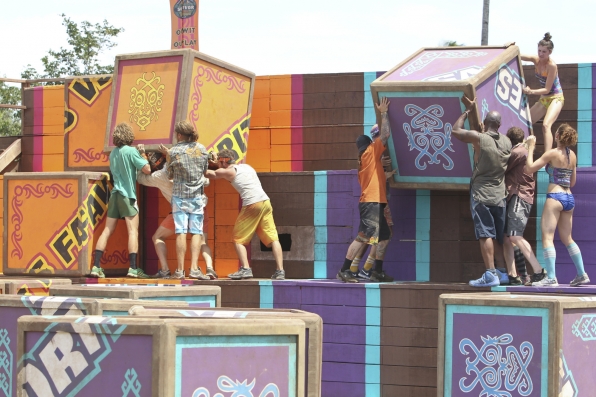